An article that highlights the need for a more natural approach to diet and preventative health care. If more dog owners looked into this and were more proactive in finding ways to help keep their dogs well, then they could reduce their vet bills significantly. 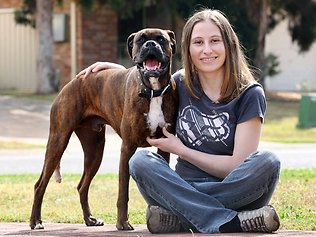 Haley Williams and her dog Titan. He was overweight and unwell until she put him on a raw food diet. Picture: Angelo Soulas Source:The Sunday Telegraph

A recent industry report, Cossetted Companions, compiled by market researcher IBISWorld, found half of all Australian households had a pet and their owners were prepared to spend up big in an industry worth $7 billion.

“Pets are not simply companion animals any more. They are now an integral part of the family that owns them,” the report said.

Veterinary services are now on par with top-ranking medical hospitals, but they come at a big cost.

“There is no Medicare for pets, so people are starting to realise you need insurance,” Dr Goldsmid said.

“Five years ago there was a negligible number of people with insurance, but people are starting to cotton on.”

Soaring veterinary costs have led to a 30-fold increase in pet insurance take-up in five years as pet owners face bills of up to $17,000 for treatment.

Hollard Insurance, the underwriter of the majority of pet insurance products, provided The Sunday Telegraph with the average and highest claims for ailments suffered by pets in the past 12 months.

They reveal the average vet bill for fractures is $2904, while the highest claim was for $11,805. And cats and dogs are also having for chemotherapy and radiation therapy at an average cost of $1281 and the highest claim of $17,436.